Koya, 23, walked with her family from Samburu to Marsabit county, experts say it suggests freedom for the animals

• Experts believe that Koya’s footprints have demonstrated that with peace, security and good conservation work, elephants once fragmented by the ivory crisis, can and are re-connecting again.

A female elephant has trekked for 78 kilometres from Samburu to Marsabit county, a remarkable journey that suggests the beasts are starting to feel safe again.

Koya, 23, made the journey with six of her family members, traversing a danger zone that was once troubled by tribal conflicts and ivory poaching.

Koya is fitted with a GPS tag that allowed its tracking. It is the first time a female elephant has ever been recorded making such a journey.

Female elephants travel with their young ones and are therefore more risk-averse, making Koya’s decision significant.

Save the Elephants’ CEO, Frank Pope, told the Star that real-time data has been useful as it helps guide the deployment of rangers to protect elephants from poachers. It can also be used to warn communities of crop-raiding elephants.

“Over time, the information on where elephants go helps to build a picture of how they are using the landscape, and what routes should be left open to them to allow them to travel without coming into conflict with people. Such long-term tracking data is a powerful way to plan landscapes that allow development while keeping natural ecosystems intact,” Pope said.

Save the Elephants is currently tracking about 100 elephants across Kenya.

Pope said all the live data is shared with the Kenya Wildlife Service operations room and with key partners in different areas.

He said the data is included in the National Wildlife Corridors Report and has been fed into discussions about infrastructure development. 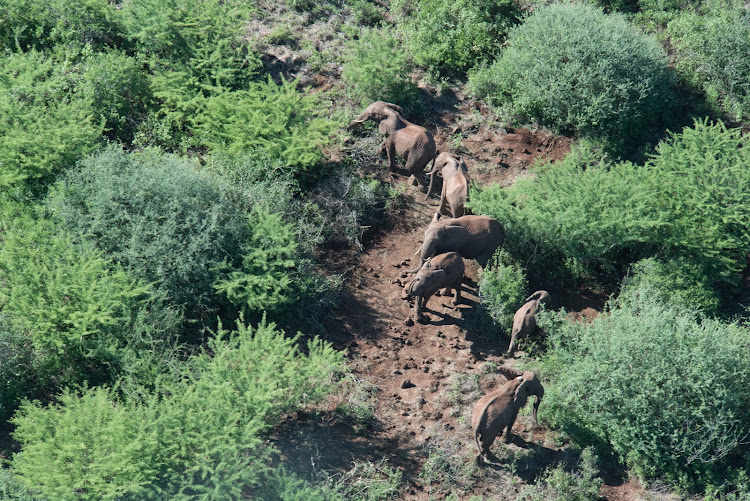 Koya with her family members in Marsabit
Image: SAVE THE ELEPHANT

The report was launched by the government in 2017 and showed that most wildlife corridors and dispersal areas have been blocked.

Pope said infrastructure development and setting aside space for wildlife will always be a compromise.

With proper planning, he says, it’s possible to have new infrastructure that doesn’t completely cut off the corridors.

He said as Kenya’s human population grows, wildlife is being squeezed into ever-smaller spaces, increasing conflict.

Pope said there are ranges of tools that can be used in agricultural areas to prevent conflict. He said well-maintained electric fences can be effective, but expensive.

In other situations, beehive fences work well, with bees replacing voltage and providing honey as a bonus.

In Northern Kenya, conflict can occur when herders bump into elephants.

Pope said the solution there is mostly to educate herders on how to behave around elephants to avoid problems.

Demand for ivory has devastated most of Africa’s elephant populations, fragmenting them into smaller and smaller sub-populations that are divided by areas where they no longer dare to roam.

In northern Kenya, years of regional conflict added to the poaching risk have made the remote and arid plains separating Samburu and Marsabit even more dangerous for elephants.

Today, however, efforts by indigenous communities to end the ivory crisis and build peace in the region through their community conservancies appear to be paying off.

Such initiatives are supported by organisations including the Northern Rangelands Trust (NRT) and Save the Elephants in partnership with the government.

Experts say Koya’s journey shows that elephants are once again willing to journey from the Samburu plains to the foothills of Mt Marsabit.

“Collaring enables us to know their distribution at any given time. This enables deployment of resources as well as the engagement of locals,” Wandera said.

He said the engagement with locals has allowed the use of resources such as water between pastoralists and wildlife without conflicts.

For the past 15 years, NRT member community conservancies have been working to strengthen governance, peace initiatives, and sustainable natural resources management.

Improving security for wildlife and people, alongside the Kenya Wildlife Service, Save the Elephants and the relevant authorities, has led to a 96 per cent drop in the number of elephants killed for ivory in NRT member conservancies since 2012.

In 2019, 50 per cent of all livestock reported stolen (a primary driver of conflict) were recovered and returned to their owners through conservancy collaborations, helping to mitigate a high number of retaliation attacks.

There are now 76 peace ambassadors drawn from representative ethnic groups that are active in northern Kenya.

Since she was collared in 2019, Koya and her herd have moved through Melako, Sera and Biliqo Bulesa community conservancies in Samburu, Isiolo and Marsabit counties.

Like all NRT-member conservancies, each employs its own team of scouts, who work around the clock to monitor and protect elephants while supporting local community policing efforts.

There are almost 800 scouts across the landscape, who work alongside mobile rapid response units in partnership with law enforcement agencies.

In Samburu and Laikipia, the elephant population is growing at approximately two per cent per year.

This means they need more safe spaces to feed, breed and move through in order to reduce pressure on areas in the southern part of the landscape where human population densities are high.

And while ivory poaching is decreasing, human-elephant conflict is on the rise as competition for pasture and water intensifies.

Experts said Koya has shown that community conservancies on the frontiers of Isiolo, Samburu and Marsabit are providing vital space, holding the potential for further expansion of elephant range.

They believe that Koya’s footprints have demonstrated that with peace, security and good conservation work, elephants once fragmented by the ivory crisis, can and are re-connecting again.

This article was first published in The Star.

An interview with Richard Leakey…

An interview with Richard Leakey…